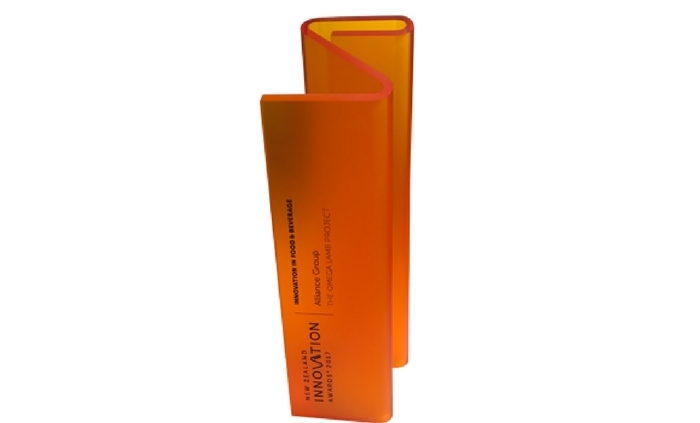 A new kind of premium lamb which has sparked the palettes of foodies in New Zealand and Hong Kong has won praise for its innovation.

The Omega Lamb Project, which has developed Te Mana Lamb, won the Innovation in Food and Beverage category at the New Zealand Innovation Awards.

The Omega Lamb Project is a Primary Growth Partnership involving Alliance, Ministry of Primary Industries and a group of farmers known as Headwaters. It is the culmination of a decade of research and development.

Headwaters geneticist Aimee Charteris led the work. She was approached 10 years ago to design the breeding programme for Headwaters but made it know that she couldn’t create a plan where there were penalties for fat. “One of the things I couldn’t get my head around in the industry was the fact that we were selecting against fat. From a biological point of view, it is critical for survival and essential for taste.

“I went through a process of what I knew and used a bit of common sense and a bit of biology. I re-thought the whole process and where I landed was fat.”

Charteris said she wanted to produce an efficient, productive composite animal with some “serious points of difference.” She chose the perendale because of its hardiness; the romney as a base breed to create meat volume; the finn because of its prolificacy and the texel because of its muscle mass.

Te Mana Lamb is raised in the high country in spring on farms ranging from North Canterbury to Southland. In summer, lambs are brought down to finishing farms to graze on chicory and chicory/red clover pasture.

“The diet nutritionally conditions the meat,” said Charteris. “That assists with the good pH in the meat and also makes sure the animal is growing and in my opinion has a robust immune system, so it’s got high energy flowing through its body the entire time.

“Consequently, it’s not only excellent when it lands on the plate, but it’s also fundamentally incredibly good for the animal while it’s in the production system,” she said.

“We see it as heralding a rebirth of different lamb dishes and reaffirmation of New Zealand as the home of the world’s best lamb. We’re still exploring how big that premium can be in the market, but certainly chefs are willing to recognise it as a premium.”

Headwaters is looking for more farmers to get on board as it looks to increase production of Te Mana Lamb based on market demand.

Te Mana Lamb is now on the menu of a limited number of exclusive Hong Kong and New Zealand restaurants and is commanding a significant premium. It is also available through the home delivery food service My Food Bag range.