The right combination of genetics, management and feeding 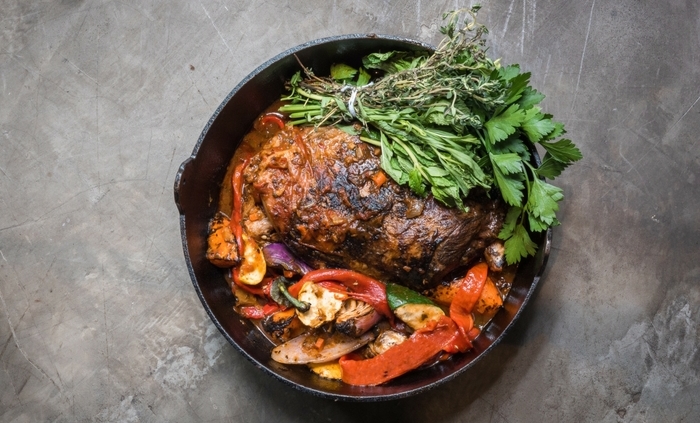 Chef and co-owner of the Wanaka Gourmet Kitchen, Dale Bowie reckons he can get even the most ardent critic to enjoy a lamb rack thanks to a product called TE MANA LAMB.

“We’ve had customers here say they don’t like lamb, but when others on their table start saying how great it is, they try some and think it’s brilliant,” Bowie says.

A generation of Kiwis has grown up with the mantra that fat is bad, yet Bowie’s table guests are told that TE MANA LAMB has a high level of Omega-3 fatty acids and polyunsaturated fats that are good for you.

“The meat is so moist and succulent you just can’t go wrong,” he says.

TE MANA LAMB is the result of a primary growth partnership between a group of like minded farmers called Headwaters, meat processor Alliance Group and the Ministry for Primary Industries (MPI).

Headwaters found that the right combination of genetics, management and feeding could alter the fat profile of lamb, produce healthy animals and deliver a healthier product for consumers, he says.

“We’ve all been scared of fat over the last decade or more, probably for reasons that have turned out to be a little spurious,” says Tate.

“But if you refocus your thinking around the ‘fat in the system’ and putting healthy fats back into animals which some would argue has got a bit lean, you find all these benefits.

“By putting healthy fats back into the ewe on the hill country, she’s better able to face the challenges of the environment and raise her lambs. We’re managing forages that promote putting on intramuscular fat in the lambs, that creates a great taste but equally focussing on the right fats like Omega-3 where we’re delivering what we believe is the healthiest red meat in the world.”

It was quite a process to get animals up to the standard required, he said.

“We’ve looked at 500 different genetic lines, we’ve looked at many different forage combinations. Part of this is at every stage of the value chain; linking and implementing best-practice orientated at this final consumer product.”

The lamb comes from a composite animal developed by Headwaters which has romney, finn, texel and perendale genetics.

She was approached 10 years ago to design the breeding programme for Headwaters but “couldn’t create a plan where there were penalties on fat.”

“One of the things I couldn’t get my head around in the industry was the fact that we were selecting against fat. From a biological point of view, it is critical for survival. Fat is essential for taste.

“I went through a process of what I knew and what I’d experienced to date through science and observation and using a bit of common sense and a bit of biology, I re-thought the whole process and where I landed was fat,” she says.

“If you don’t have fat you just can’t function and particularly when you see where sheep production is right now, heading into the higher hill country.”

Charteris says she wanted to produce an efficient, productive composite animal with some “serious points of difference.” She chose the perendale because of its hardiness; the romney as a base breed to create significant volume; the finn because of it prolificacy and the texel because of its muscle mass.

TE MANA LAMB is raised in the high country in spring on farms ranging from North Canterbury to Southland. In summer, lambs are brought down to finishing farms to graze on chicory and chicory/red clover pasture.

“The diet nutritionally conditions the meat,” says Charteris. “That assists with the good pH in the meat and also makes sure the animal is growing and in my opinion has a robust immune system, so it’s got great energy flowing through its body the entire time.

“Consequently, it’s not only excellent when it lands on the plate, but it’s also fundamentally incredibly good for the animal while it’s in the production system,” she says.

Stud manager for Headwaters Simon Saunders says the breeding programme is based on two key objectives.

“Firstly making sure we have a ewe that does well in the hill country. And secondly, one that will produce a fantastic product.

“There is a significant amount of monitoring and recording going on to capture all the data we need so we can measure the genetic gain. Sitting to the side of the breeding programme we have a progeny test where we take some elite rams, and we put them over some commercial ewes. The offspring from the commercial ewes are killed, and we capture a whole lot of data around quality traits.”

About 30,000 TE MANA LAMBs reached the programme’s criteria for Omega-3 intramuscular and polyunsaturated fats this year.

Caberfeidh Station in the Hakataramea Valley finished 50 per cent of the targeted number on the chicory mix.

Caberfeidh is one of the Omega project’s pilot farms, and it’s already clear that the lambs thrive on chicory and are helping increase production.

Station block manager Jason Sutherland says the management principles of chicory are similar to lucerne, but it is “a lot trickier” and more sensitive to the environment.

“Lambs are put on chicory until it is down to 11 centimetres and then moved on. Most of the protein and all of the goodies are in the top of the leaf. Go below 11cm, and you lose all that.

“We have a saying with lucerne that if you think stock need to be shifted tomorrow, do it today, but with chicory, we have found if you think you have two days left you need to move them today.

“We usually finish the lambs for a mean of 40 days, some longer depending on weight.”

Sutherland says the Omega Lamb Project has helped him develop a farming system.

They were looking to position their lamb at the top end of the market, which would give farmers higher returns, he says.

“At this stage, it is very much aimed at the fine dining experience. We see it as heralding a rebirth of different lamb dishes and reaffirmation of New Zealand as the home of the world’s best lamb.

“We’re still exploring how big that premium can be in the market, but certainly chefs are willing to recognise it as a premium.”

Headwaters celebrates its 10th anniversary this year and is looking for more farmers to get on board as its looks to increase production of TE MANA LAMB based on market demand.

This article originally featured in The Southland Times.