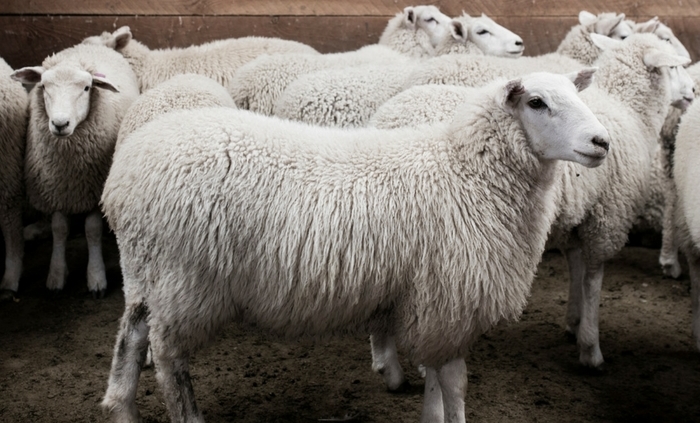 I “This is the part where it gets tricky, the part where most people disconnect. Why doesn’t anyone want to talk about the fact that eating meat means that animals are killed?”

Or is it? A report earlier this year by the Organisation for Economic Co-operation and Development (OECD), said New Zealand’s annual sheep-meat consumption has dropped to around 900 grams per person. In 2006 it was 19 kilograms per person. There are claims that the OECD report may be distorted, but we do appear to be eating less lamb.

Meat consumption in general continues to receive a thrashing from animal-rights advocates and plant-based nutrition gurus. Mondays are now officially meatless and our social feeds are crammed with exciting vegetarian and vegan recipes that encourage us to think beyond the standard piece of protein accompanied by 2-3 token veg on our plate. With price point being a major deciding factor for many of us and with pork and poultry being (for the most part) cheaper options, New Zealanders might be looking at that leg or rack of lamb as a special treat, no longer a week-night ingredient.

So perhaps the future for New Zealand lamb lies more within the premium arena?

There were a number of great New Zealand lamb producers who wanted to be in this special NZ issue of Cuisine. I want to be transparent with you about what we want to achieve here. I chose TE MANA LAMB because of the many interesting elements they can bring to this story. Science, genetics, technology, integration with the farmer and the consumer and, most importantly, traceability. And no, TE MANA LAMB did not pay to be included.

BRINGING BACK THE FAT My journey started in the South Island at Mt Burke Station located between two magnificent lakes, Wanaka and Hawea. The current owner Tim Burdon is the third-generation Burdon to farm the land. Tim and his manager Grant Ruddenklau talked me through the realities of farming sheep that are specifically bred for the New Zealand high country.

The TE MANA LAMB programme has emerged from the Omega Lamb Project Primary Growth Partnership involving Alliance Group Limited, Headwaters and the Ministry for Primary Industries. It has evolved from over 10 years of experimentation with the aim of developing a breed that comfortably forage beyond the flat, easily accessible and valuable farming space. Over 500 genetic lines were tested to find the ultimate ram. The George Clooney of rams was Ram 211, whose offspring have thrived in the high country. Each year 80 new sires are tested, and the very best enter the elite breeding programme across the 33 farms currently working with TE MANA LAMB.

While breeding these sheep to be healthier and better adapted to a highcountry environment the scientists and farmers discovered something new. The sheep had developed an intramuscular fat, with marbling, richer in Omega-3 than any other red meat. For over 30 years the industry has been taking the fat out of our lamb to conform with a consumer demand for leaner meat. Now TE MANA LAMB is putting the fat back in.

YOU ARE WHAT YOUR MEAT EATS My next stop was at Waifield farm, where the lambs that are bred at Mt Burke Station are delivered to spend their final 30 days. Here they graze on chicory herb pastures that contribute to the naturally high levels of Omega-3. Steven Romes, his wife Helen and son Scott work the farm and take great pride in their part of the project process. They tell me that the integrated approach from TE MANA LAMB has made them think differently about their product. Being encouraged to work alongside the developers and processors and then having opportunities to meet the chefs that cook with their lamb has meant that their own journey no longer ends with watching the lambs go out the gate. They have become interested in more than just the end price.

After a good look around the farm and a walk through the lush chicory fields Steven fires up the barbecue and I’m treated to lamb racks, fillets and Helen’s amazing corn salad. Having those beautiful lambs just a few paddocks away, ignorantly going about the business of fattening themselves up for slaughter made me think a lot more about the food on my plate. Perhaps it was the fresh air, perhaps it was because I needed it to be good after feeling a connection to the lambs: it was pure and honest, no intricate cooking techniques or sauces, just lamb straight off the barbie and it was pretty damn good. Actually, it was excellent.

THERE HAS TO BE A BUTCHER After my night at Waifield farm, I’d intended to pop into Queenstown for a lovely lunch of said branded lamb and then fly back to Auckland. But, on discovering that the Alliance Lorneville plant was only an hour away, I wanted to see it. What’s the point of being on a journey if you can’t reach the end point? After a few phone calls I was cautiously granted permission.

This is the part where it gets tricky, the part where most people disconnect. Why doesn’t anyone want to talk about the fact that eating meat means that animals are killed? The current focus for TE MANA LAMB is to build brand awareness with New Zealand chefs and yet most of the chefs I have spoken to have not witnessed the end process. I needed to see it.

Just getting into the plant was tedious: after much hand washing, hair netting, donning of hygienic jumpsuits, plastic gloves, protective goggles and commando-style gumboots, I waded through what felt like miles of bootwashing troughs and finally made it to the processing floor. They started me off at the boning and packaging end. I was mesmerised by the creamy pale-pink skinned lamb whizzing past on hooks, quite beautiful in shape, all exactly the same size. I wasn’t ready for the display of human skill, almost like watching a well-choreographed ballet.

Precise, tight, neat, sharp, repetitive, every movement fully planned and artfully executed. The finished cuts were clean and impressive with almost every part used and accounted for. I’m told that TE MANA LAMB is even developing a range of stocks to put the flavourful bones to good use.

I met senior supervisor Allan Brunton, who talked me through the intricate and rigorous processing requirements for the TE MANA LAMB product. A key aspect is that every piece of lamb that leaves that floor can be traced from behind the farm gate to the boning room. This makes it possibly the most traceable of any lamb programme in the world.

I was taken by Allan’s overwhelming sense of pride in the job as he talks about the professionalism on the floor. The Lorneville plant processes a number of different lamb products but Allan believes his team prefer to work the TE MANA LAMB shift because of the consistency in size and weight and the texture, “like slicing butter”.

I ask about the team, “Do they even eat lamb considering what they have to do all day, every day?” He tells me the staff-discount offers are always a sell out.

What does he love about his job? “The knowledge that my team’s attention to detail, along with the attention of the farmers who produce TE MANA LAMB and the chefs who cook it, has a direct impact on the consumer experience.”

AS WE MOVE FURTHER down the line towards the area where the lambs enter the processing line I’m asked a number of times if I want to proceed. So far I’m distracted by the slickness of the operation, the intense concentration on the faces of the processing team and the dance that the high-tech machinery performs around them.

But really, what did I expect? I know that with my decision to eat meat comes a requirement for me to be OK for an animal’s life to come to an end.

I’m glad TE MANA LAMB were brave enough to let me in to experience this, as it is an important part of the story. The reality is that if we want to eat meat someone needs to be the butcher. My experience at TE MANA LAMB reminded me of childhood trips with mum to the local butcher, and of his knowledge and pride in his product. As a result, I’m thinking a lot more about the difference between average lamb and premium lamb.

And so, instead of bringing you pictures of fluffy lambs and lush green pastures, Cuisine art director Fiona Lascelles and photographer Jason Creaghan were charged with the difficult task of photographing the butchered parts of a whole raw lamb.

We hope that you might consider the part of the process that is not usually discussed, that bit within the paddock-to-plate story that is usually left out. If you choose to eat meat, then you should understand, accept and appreciate the whole journey from beginning to end.

It is heartening to hear that chefs are requesting more and more the underused cuts along with the familiar.

“I wasn’t ready for the display of human skill, almost like watching a well-choreographed ballet. Precise, tight, neat, sharp, repetitive, every movement fully planned and artfully executed. The finished cuts were clean and impressive with almost every part used and accounted for.”

This article originally featured in the April issue of Cuisine magazine.